Fixed Rate vs Variable Rate Mortgages: Which Should You Choose? 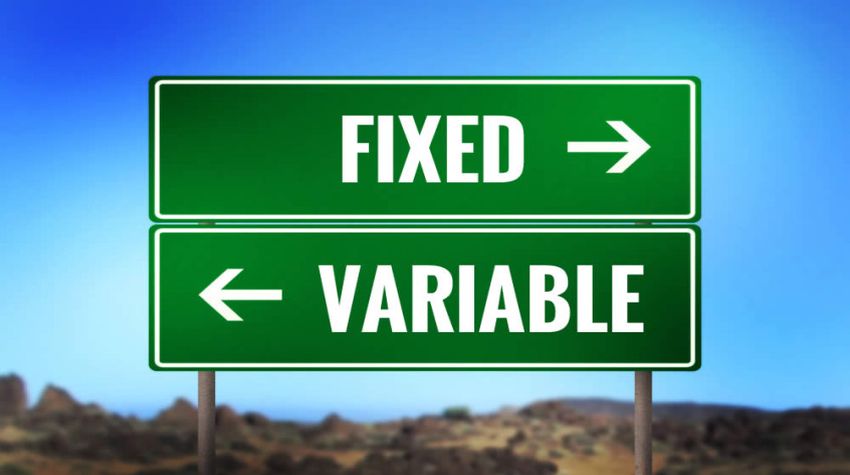 One of the biggest decisions you’ll face when getting a mortgage is whether to choose a fixed or variable rate mortgage. At the moment, it’s hard to go wrong with either one. After all, mortgage rates in Canada are at historic lows. But the type of mortgage rate you choose is something you should spend some time considering, as the best choice depends as much on your individual circumstances as it does on any economist’s interest rate outlook.

What is a Variable Rate Mortgage?
A variable-rate mortgage is a mortgage linked to the Bank of Canada Prime Lending Rate and fluctuates during the mortgage term. You can obtain an open or closed variable rate mortgage, but the most common term is a 5-year variable closed.

For example, at the time of this writing, the Bank of Canada Prime rate is 2.45%. If a variable mortgage were priced at Prime -.90%, your interest rate would be 1.55%. If Prime were to increase by 0.25% to 2.70%, then your mortgage interest rate would rise accordingly to 1.80%. Even though variable mortgage rates fluctuate during the term, the monthly payment remains the same.

What is a Fixed Mortgage Rate?
A fixed mortgage rate stays fixed for the length of the mortgage term. It’s available in terms ranging from 6 months to 10 years, although the most popular term is a 5-year fixed rate. Unlike variable rates, which move with the Prime Lending Rate, fixed mortgage rates follow Canadian bond yields.

A History of Fixed vs. Variable Mortgage Rates
If you look back at the past 20 years or so, variable mortgage rates have been consistently lower than fixed rates with only a couple of exceptions. This might make it seem like choosing a variable rate would be a no-brainer, but it’s not so clear-cut. At the moment, both types of mortgage rates are at historic lows, and the gap between them is very narrow. So, there are fewer savings to be had by going with a variable rate mortgage, while the risk of rising interest rates remains.

Reasons to Choose a Fixed Mortgage Rate
Here are three reasons why you might want to choose a fixed-rate mortgage:

1. You expect interest rates to rise.
While no one knows when the prime rate will rise and fall or by how much, the economy can provide signals that rates may be headed upwards or downwards. If you anticipate that mortgage rates may be on the way up and you can secure an attractive fixed-rate, all things being equal, it might be your best choice.

2. You have limited budget flexibility.
Perhaps you’re buying your first home, or your affordability has been stretched with the mortgage you’re taking on. If you lack the flexibility in your budget to handle a sudden increase in your mortgage payment, your best option is to choose the certainty of a fixed-rate mortgage.

Reasons to Choose a Variable Mortgage Rate
Sometimes a fixed rate is the way to go. But here are four reasons why a variable mortgage might be the right choice:

1. You expect interest rates to fall or remain flat.
A variable-rate mortgage could be the best choice in a period of a stable or falling prime rate, even if it’s only slightly lower than the going fixed rate because the terms of a variable mortgage are generally more flexible than those of a fixed mortgage. (see #4)

2. You have plenty of budget flexibility.
The numbers don’t lie. Over the long term, you’ll be ahead of the game by choosing a variable rate. But there’s some risk involved. If your cash flow situation is good and you can withstand the potential of a sudden increase in your mortgage interest costs, a variable rate could be worth the risk.

3. You are risk-tolerant by nature.
If you are a person who can handle a fair amount of risk, then you probably have the fortitude to handle the potential ups and downs of a variable mortgage, all things being equal.

4. You Plan to Sell Your House
One of the biggest drawbacks of a fixed-term mortgage is the potential for astronomical penalties, should you decide or be forced to move in the middle of your mortgage term.

Fixed-mortgages can be subject to something called an Interest Rate Differential charge or IRD. Variable mortgages are usually only subject to a more predictable 3-month interest penalty if the borrower breaks the mortgage early. So, if you think that you might move before the end of your mortgage term, the variable rate is probably a safer bet. You could opt for an open mortgage to avoid the penalty, but the interest rates will be far higher.

How to Reduce Variable Rate Mortgage Risk
If you opt for a variable rate, you are assuming some risk if interest rates rise suddenly in the middle of your term. Yes, there is the option of converting to a fixed rate, but that forces you to try and time the market, and that’s not likely to end in your favour.

You could opt for the lower interest rate but increase your monthly payment to match the fixed-rate payment of $1685.00. This will increase the amount of money going towards your principal, increasing your interest savings, and providing you with a buffer should interest rates rise.

The Bottom Line on Fixed vs. Variable Mortgage Rates
There is no shortage of prognosticators ready to tell you that a fixed or variable rate is the best choice. They always seem to know what’s going to happen in the future. However, the truth is that no one knows exactly where interest rates are headed. There are far too many unknown variables that can alter the course of the economy. For example, how many rate forecasters saw COVID-19 coming at the outset of 2020.

The bottom line is that choosing a fixed or variable rate has as much to do with your individual circumstances, such as your long-term plans, budget flexibility, and your personal risk tolerance level as it does with the cold hard numbers.